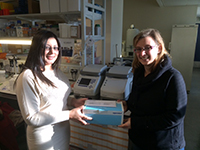 The FEBS Anniversary Prize started in 1974 on the occasion of its 10th anniversary. It is funded by capital gifts from Boehringer Mannheim and Eppendorf and is awarded annually to researchers of 40 years of age or younger for outstanding achievements in the field of biochemistry and molecular biology or related sciences.

Up to two winners are selected from the best abstracts submitted to the organisers of the annual congress of FEBS (Federation of European Biochemical Societies). The prize administration is managed by both FEBS and the Gesellschaft für Biochemie und Molekularbiologie (GBM), and up to two Anniversary Prizes of €2,000 and a diploma are awarded each year.

Eppendorf would like to congratulate both winners of the FEBS Anniversary Prize: Katie Doores, Dept. of Infectious Diseases, King’s College London and Maya Schuldiner, Department of Molecular Genetics, Weizmann Institute of Science, Israel.