What can you do if your centrifuge and rotor provide, e.g., only lower g × force than your protocol requires? You can centrifuge for an appropriate longer length of time. But how much longer? And how do you calculate this? The answer: by using the k-factor, a measure of the sedimentation distance. This will tell you how long it will take the particles to settle at the bottom of the test tube.

The radius of the rotor and the angle of the bores as well as the type of vessel respectively the adapter you use will all have an impact on the sedimentation distance and thus on the centrifugation time you will need.

The k-factor is a measure of the sedimentation distance and tells us how long it will take until the particles settle at the bottom of the test tube.

The smaller the k-factor, the better the pelleting efficiency.

The formula for calculating the k-factor considers these parameters:

To achieve the same sedimentation result and compensate for not having g × force, you can calculate how much longer to centrifuge using a formula based on the k-factors of both rotors and the centrifugation time of the rotor originally used. 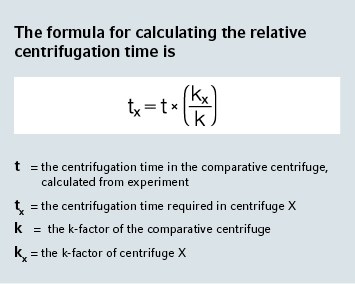