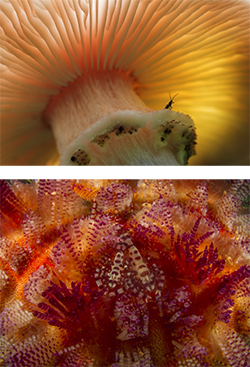 The winners were announced last night on the 12th October at the Royal Society of Biology Annual Awards Ceremony on at The Hatton, London.

The prestigious title of RSB Photographer of the Year has been presented to Duncan McNaught, who photographed the often overlooked world of fungi and insects in his submission "Welcome to my humble abode".

Duncan said of winning the title of RSB Photographer of the Year: "I'm highly delighted and honoured my image was selected, the competition was high and I appreciate the difficulty the judges must have had in choosing the winner, I feel proud to have been part of this year's competition and look forward to sharing my amazing news with my family and friends in Scotland."

17 year old Dheeraj Nanda has been awarded the RSB Young Photographer of the Year prize for his submission "Coleman on Fire", which captured the symbiotic relationship between the Coleman Shrimp and the Fire Urchin in Indonesia.

The coleman shrimp and fire urchin share a symbiotic relationship where the coleman shrimp seeks refuge among the spines of the urchin and here the female is the larger one with the male being smaller just like in the case of spiders and a few other insects.

"There are plenty of macroscopic critters beneath the sea surface and they never cease to impress us. I’ve always felt that these creatures should not be unnoticed and showcasing their images in these events would do justice for their beauty. "I would like to thank RSB for this opportunity and this is for sure a lot of encouragement for my work."

The entries featured a wide variety of species from across the globe, from as far as Indonesia and Madagascar, and ranged from microscopic insights into the development of frogspawn, to the incredible emerald hues of an Indian lake photographed from 30,000 feet.

This year, the competition theme was The Hidden World. The natural world harbours a wealth of secrets and surprises, and photographers were invited to uncover this hidden world of biology.

The Society wishes to thank Eppendorf for their support of this competition.