Energy is the most important “raw material” of our time. At the same time, it represents a significant cost factor in the balance sheet of most companies.

So we take advantage of every opportunity to reduce the amount of energy we purchase. This is also why measures to improve energy efficiency and our environmental footprint are at the top of the agenda for every new construction or building expansion project we initiate. Power supply is a multi-source story: Saving energy, change to green energy, usage of geothermal energy, thermal power plants, second usage of energy which is used anyway – there are many ways to improve the energy situation within a company. 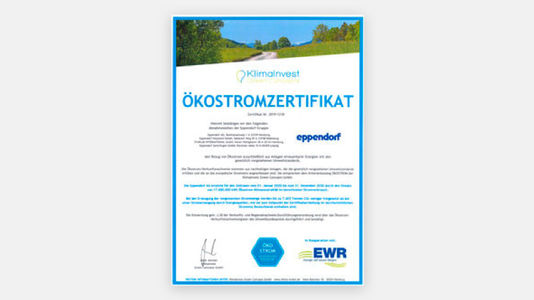 The energy required by most of the production facilities of the Eppendorf group are exclusively based on renewable energy sources that meet the statutory environmental standards. Thus, the production facilities of Eppendorf achieves climate neutrality in their calculated electricity consumption. This means that emissions at Eppendorf’s European and American locations are offset by the use of wind, sun, and water power.

In 2021, the German facilities used 38,600 mWh of certified green power, resulting in a non-emission of ca.16,000 t CO2 compared to power from classic sources. The headquarter office with local production facilities of instruments and liquid handling uses 100% green power since 2020. Our production facility in the USA is powered by 100% wind energy. The assembly of our ULT freezers in the UK is based on 100% renewable energy since 2018.

Our recently acquired Japan-based factory of our high-speed and ultra centrifuges is still using a classic power mix due to local conditions and contracts.

This means, all products assembled in our classic Eppendorf locations in Europe and America are based on 100% renewable electric energy contracts in our facilities. By purchasing electricity from green renewable energy sources, the CO2 emissions of Eppendorf were reduced by around 57% from 2020 to 2021. 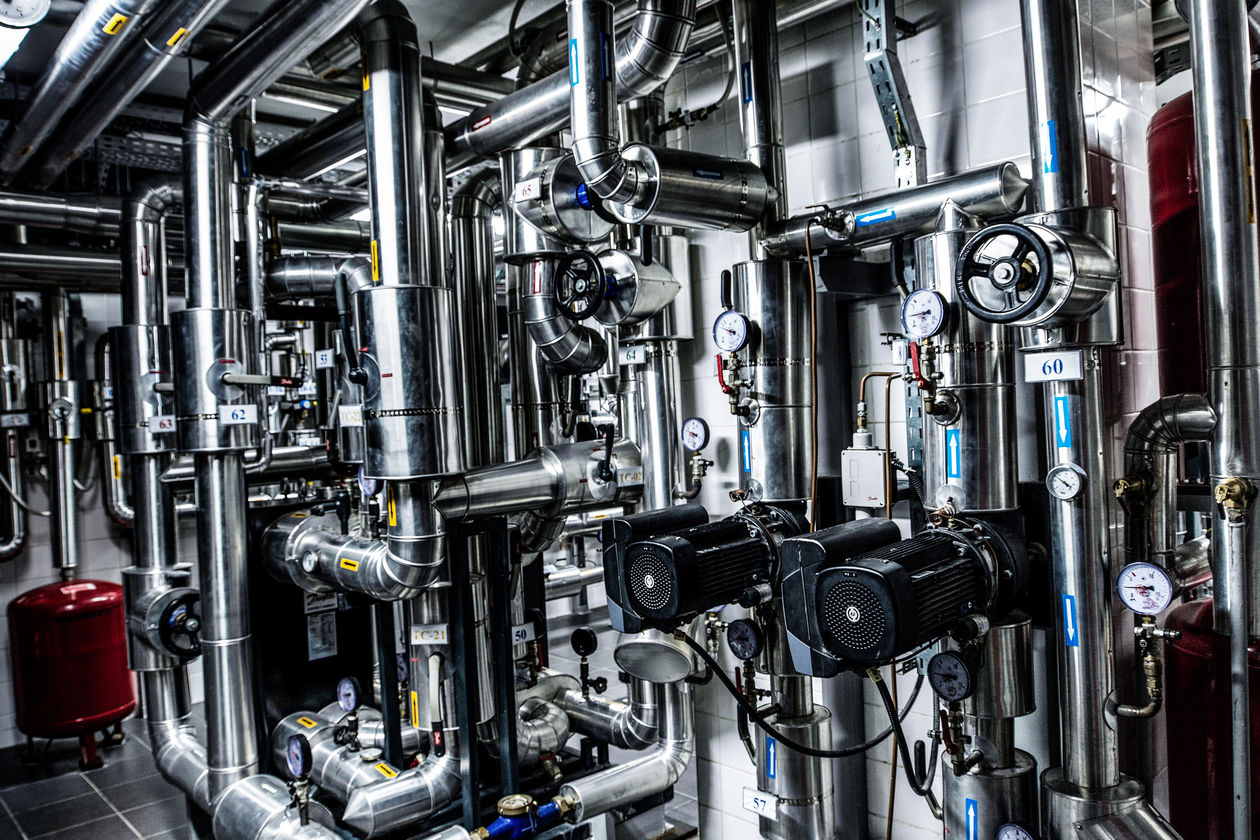 A thermal power station is a compact power station operated directly where the power is consumed. Basically, the station consists of a motor, a generator, and a heat exchanger. The interaction results in supplying the building with both heating and electrical power.
The special feature of this technology is the efficiency rate. It is significantly higher compared to the traditional combination of local heating and a central power plant,: The heat produced by the thermal power station during electrical power generation can likewise be used directly at the site.

Depending on their design, thermal power stations can be heat-driven (that is, their output is oriented toward local heating requirements) or electricity-driven (with their output oriented toward electricity needs). Because their efficiency rate is about twice as high as that of a conventional large coalfired power plant, they are currently regarded as the economically and ecologically most sensible way to generate heat and electricity for larger private, commercial, and industrial buildings.

As with nearly all industrial manufacturing processes, the need for heating and electrical power is one of the most significant environmental factors that a responsible and environmentally conscious company must consider. This naturally applies to our consumable production facility in Oldenburg. In 2014, we decided for a greater energy efficiency and sustainability by installing a modern thermal power station which since then enables to benefit for the first time at Eppendorf from combined heat and power generation. The sophisticated energy recovery technology enables a total utilization rate of around 90%.

A large modern coal-fired power plant (which is still the common power plant around the globe) loses approximately half of the produced energy as heat which is wasted. In contrast to this, the heat produced by our thermal power station during electrical power generation can be used directly in our operations.

For our facility in Oldenburg, this means more than just economic progress; the environment, too, benefits from the increased energy efficiency in our production there. The power station naturally reduces the carbon footprint of our production by a substantial degree.

"When we commissioned the new thermal power station, we took a big step forward toward optimizing our energy supply. With this system, we can supply around 50% of the electricity we need and meet nearly all of the plant's cold water requirements." 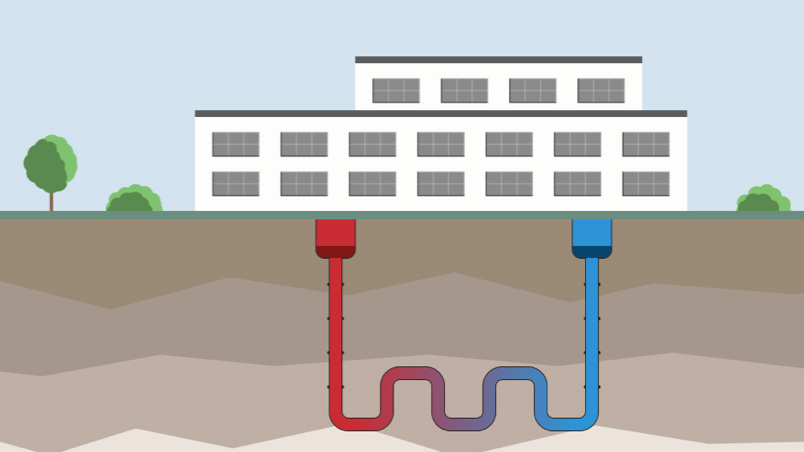 A common feature of growing companies is the need to physically extend existing facilities or open new ones, both of which require construction measures. Following the general request to actively reduce CO2 emissions, our construction measures offer us the opportunity to improve our ecological footprint.

A good example is a dedicated office building at our company‘s main location in Hamburg, Germany. In 2013, we evaluated, planned and finally implemented the utilization of the site‘s existing geothermal energy for heating and cooling the entire building. Since 2014, the heat pumps required by the geothermic plant are no longer supplied with external electrical power, but with solar power generated by the system on the roof of the building. Although it is occasionally necessary to use externally sourced electrical power at night, the building has a nearly even energy balance.

This construction project posed a number of special challenges. For example, before the geothermal plant was built, the anticipated heating and cooling capacity had to be carefully calculated and assessed in relationship to the geothermic probes that needed to be installed. The number and installation depth of those probes and the material used for them had a significant impact on the work and expenses involved in realizing the geothermic plant.
Eppendorf‘s extensive test drilling and the insights it gained from the use of different types of probes and drilling depths were pioneering efforts in the region.
We were well aware of the uncertainties of such a project, but it was a challenge we enjoyed meeting, and our efforts were rewarded by the energy selfsufficiency of the building, the valuable insights we gained into the use of geothermic systems in the region, and the concrete contribution the project enabled us to make to the goal of environmentally friendly energy supply. 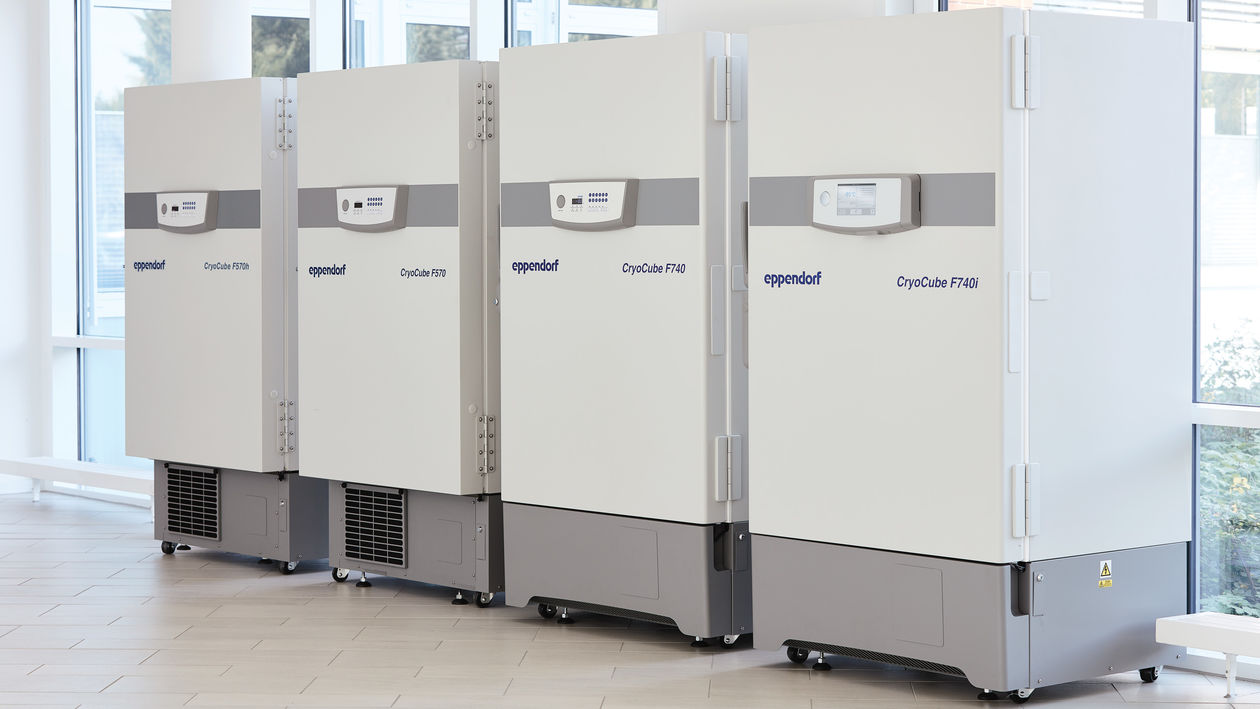 The Eppendorf ULT freezer manufacturing process includes several quality checks. Each ULT freezer is thoroughly inspected to meet the rigorous quality guidelines. The final inspection takes more than 24 h and is based on a real test run of the unit down to -80 °C. This process is documented by an individual Certificate of Quality, complete with serial number, provided as standard for your documentation.
The compressors consume energy to cool the ULT freezer at -80 °C but also generate heat.
The freezer manufacturing facility takes advantage of this: The heat output during final individual unit testing discharges into the building heating system.